The Mac-only Airo AV is known for its simple interface. But does it offer enough features to be worth the cost (even with a 30% off promo code)? Sure, it’s Mac-specific — which is rare for an antivirus — but does it have everything you need to keep your Mac protected from malware?

I’ve tested almost 30 antivirus programs to be able to give you a complete look at all of the pros and cons in this detailed Airo AV review.

Airo AV performs well when protecting against malware — it has a 100% malware detection and removal rate in all of SafetyDetectives’s tests — the same as more well-known brands like AVG and Bitdefender.

Update: Earlier versions of Airo AV had full scans which scanned fewer files on my system than competitors — about 1/5th what almost all the others I’ve tested have done. This lower scan number was due to Apple’s sandboxing rules which block software from seeing important system files. Since Airo AV didn’t ask for full-disk permission, it didn’t have this level of access. This type of scan has the potential to leave users vulnerable to malware that may be hiding in system files. That’s why it’s great that Airo has updated its software to ask for full-disk access. I re-ran this test on my Mac, and Airo AV now scans all of the files on my system.

Airo AV’s browser extension does well when protecting against adware and phishing scams and has a large list of dangerous websites that it blocks. This list is updated regularly, so your device will always be protected, even from newer threats. I don’t think it does a better job than Malwarebytes in this regard, but it’s still pretty good.

Unfortunately, the software has no firewall app, so it’s unable to protect against some of the biggest threats to Mac systems. These are standard features in top competitors such as Kaspersky and McAfee, although these other antiviruses aren’t designed specifically for protecting Mac computers (which Airo AV is).

There are no extra features that come with Airo AV. Other antiviruses sometimes include extras like a password manager, but Airo AV sticks exclusively to antivirus protection. This is not really a negative though because it’s always best to go with a standalone password manager like Dashlane or LastPass.

Airo AV uses machine learning to look for patterns that are common across different types of malware. This allows the software to combat zero-day threats — new threats that attack unknown problems in software.

Zero-day threats can cause a lot of system harm and even steal personal data. Since Airo AV’s artificial intelligence is always learning, it gets better at protecting your machine over time. This is an important feature that helps the software always stay up-to-date.

This is a great feature for any Mac, and it will definitely help protect you from a potentially devastating attack. 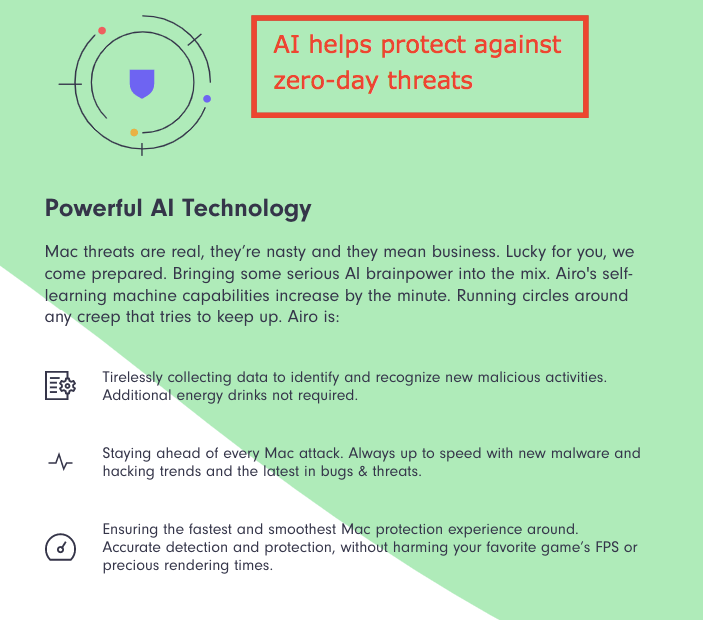 Airo AV is always scanning your system to detect malware and other threats before they have a chance to cause harm.

Due to its simple design, Airo AV is able to use real-time scans without slowing down your system. I have a 4 GB 1.6 GHz Intel Core i5 MacBook Air, and it never took up more than 25% of my system’s resources. This is comparable to Kaspersky — which used up to 28% of resources — and Bitdefender — which used up to 19%. 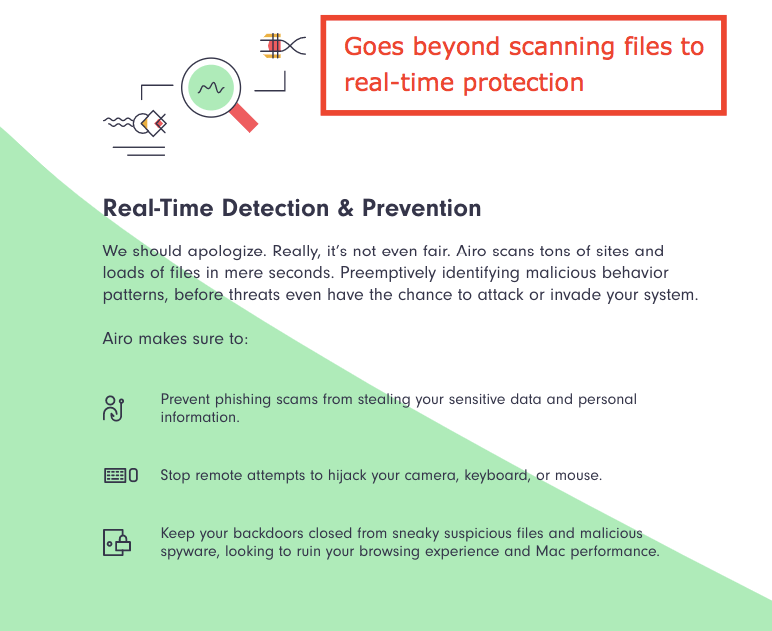 Airo AV’s spyware protection not only scans threats like downloads and website popups, but it also scans other hardware devices such as webcams, mice, and USB drives. These devices often introduce viruses and are a big vulnerability in Macs, so this is a welcomed feature.

When you plug in a device, Airo AV automatically checks to make sure malware is not being transferred to your system. If a threat is detected, it is quarantined and you can inspect it to see if you want to remove it.

That said, Airo AV has some pretty good spyware protections, but they don’t go too deep into anti-spyware like some other antiviruses do. If you’re looking for an antivirus with a focus on anti-spyware capabilities, check out our best anti-spyware recommendations over here.

Since the value of many cryptocurrencies like Bitcoin has increased, new malware has emerged that uses infected systems to mine crypto on behalf of third parties. In these cases, hackers use your system resources to decrypt complex files known as blockchains. This can significantly slow down your system.

Airo AV claims it has specific scans in place to prevent this type of infection. It’s hard to know how unique this feature is, since most antivirus apps group this protection in with other malware protection.

But it’s good that Airo is aware of this threat and is actively trying to combat it.

Airo’s browser extension — Web Guardian — blocks websites that are involved in phishing scams or are distributors of malicious software. Though I try to stay away from dangerous websites (who doesn’t?), I did appreciate Airo’s ability to protect me when a popup made me accidentally visit a phishing site.

The extension also monitors your downloads to notify you when you download adware, spyware, malware, or other harmful files. Unfortunately, it’s only available for two browsers — Chrome and Safari. But these are the two most-used Mac browsers, so I didn’t hold this against Airo. 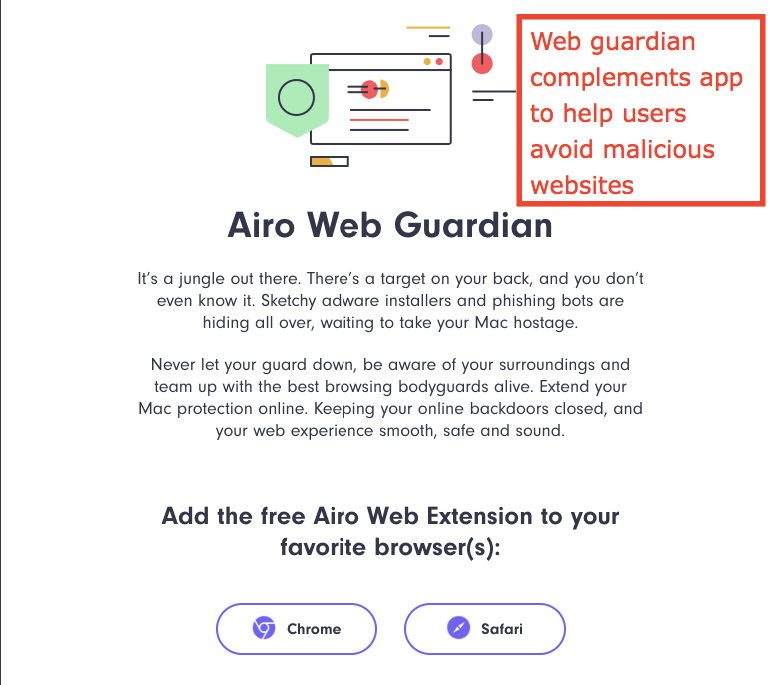 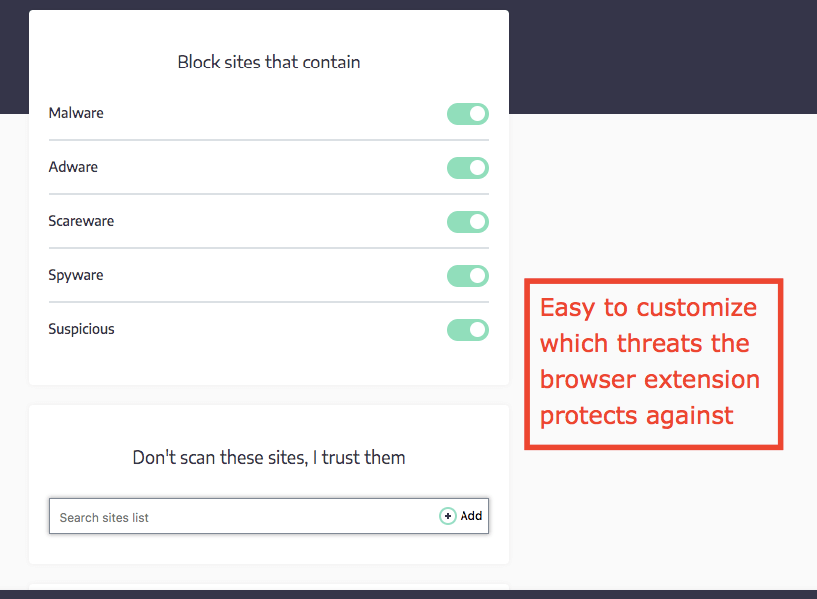 Airo AV offers three pricing levels, each billed once per year. The only difference between each plan is how many licenses you receive. The plans are:

Here’s what you’ll get with all three plans:

The more licenses you buy at once, the cheaper each license becomes. But Airo’s plans could be seen to be a little on the pricier side — the Single Suite is more expensive than Kaspersky and McAfee, and it’s comparable to Norton.

However, if price is your main issue, there’s a 30% off Airo AV discount code to help out with that.

The billing style is a bit limiting, requiring you to commit to a full year of service each time you renew. Most other antivirus software will allow you to subscribe on a monthly basis, so this long-term commitment could be seen as a little off-putting. But in reality, you need an antivirus in the long-term — so a year-long commitment isn’t that big of a deal.

Airo AV Ease of Use and Setup

Setting up Airo AV is extremely easy and you just need to launch the .dmg file after downloading it from the website. After that, installation takes care of itself, and the software starts up once the process is complete.

Airo AV runs from the menu bar as a small dropdown window. While this can be expanded into its own window, all that does is change the appearance a bit… it doesn’t currently offer any more features. 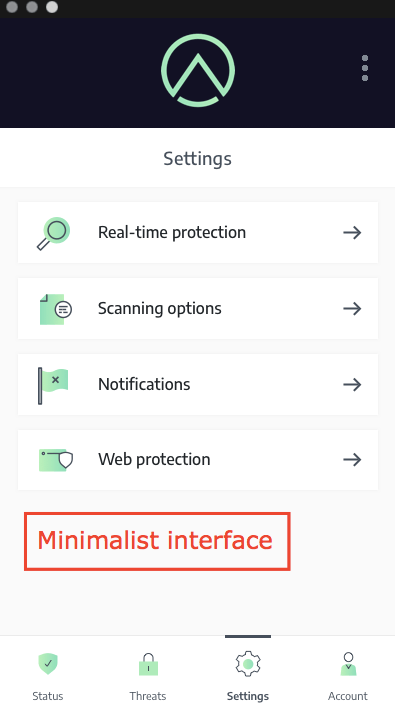 The software has a simple interface which only has a few buttons. Running a full scan is easy — requiring a single click — and it won’t slow down your machine.

The first scan I ran took 1 hour and 30 minutes, which felt long. Newer scans took the same amount of time, which means the software rescans files that haven’t changed since the last scan. Airo has said they’ve added caching support for already scanned files, but I’ve updated the software since then and it still takes 1 hour and 30 minutes to run a scan. Other brands, like Norton, offer the ability to skip over unchanged files, and that significantly shortens scan times.

I both liked and wasn’t sure about Airo’s approach here. I was reassured that — should there be some malware lurking in the unchanged files — Airo would find them. On the other hand, I would have liked a quicker scan.

That said, there is the option for a “Quick Scan”, but that doesn’t give as in-depth a look into the system as the “Full Scan” does.

During the “Full Scan”, I was unable to access other portions of the app, which I felt was limiting. However, I realized that, if I was running a scan in the background, I wouldn’t want to access other parts of the antivirus software anyway, so it’s not really a big deal. 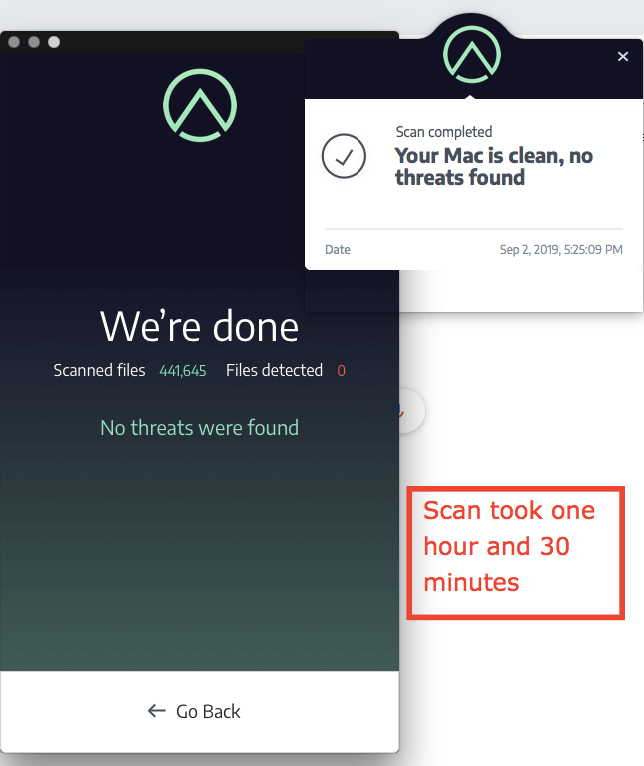 When Airo detects a threat, it’s placed into quarantine and you can decide if you want to delete it from your system. I like this feature because it helps you avoid accidentally losing important files.

You are allowed to whitelist URLs and filetypes, and you also have the option to stop the app from checking for certain types of software — like adware and scareware. Beyond that, there’s little else you can do in the app and browser extension, since it’s mostly designed to run in the background — which is a good thing.

There is no mobile app for Airo AV at this time — you can only access the software from a Mac computer.

Airo AV’s customer support is limited — there’s no phone support or forum option. The company does have a live chat option that is available once you sign up for an account, but it was offline when I tried to use it during normal business hours (in PDT). 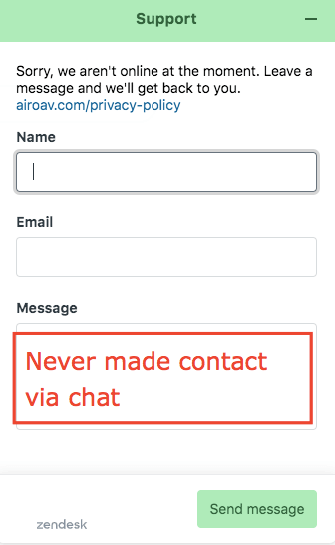 The only other way to get in touch with customer support is through an email form on the website. Response time was about 12 hours, which is not great. However, the support rep was friendly and helpful when they did get back to me.

There is an FAQ, which does have answers to many issues, but it’s not very big — it only has 11 basic questions answered at the time of writing. 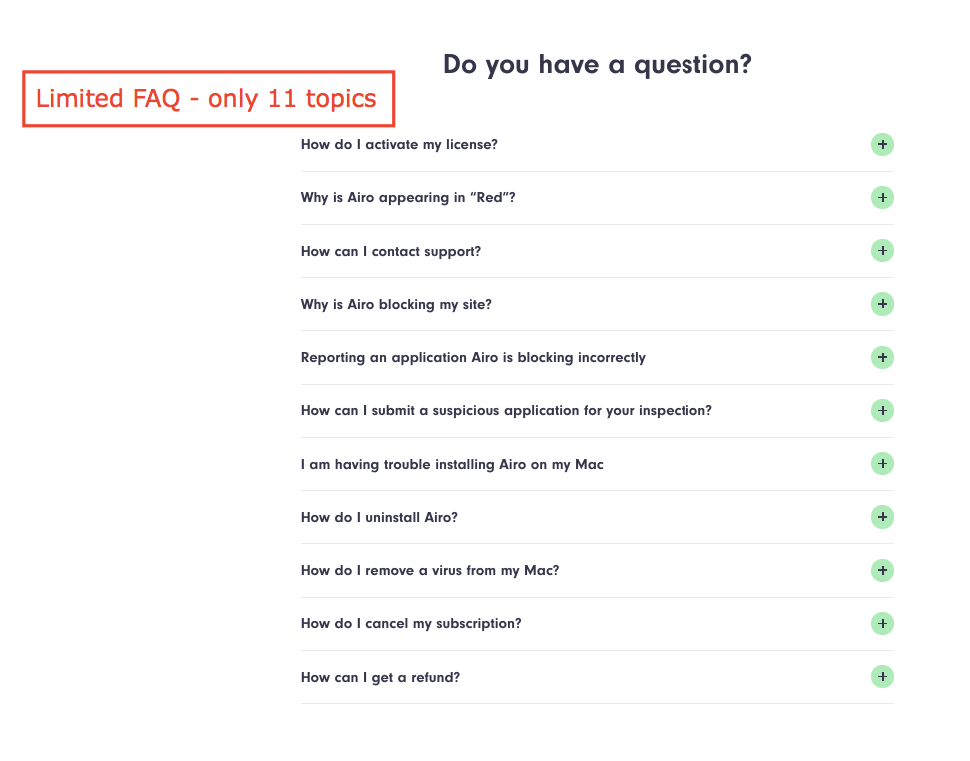 Is Airo AV Worth the Price?

Airo AV has a simple interface that’s intended to blend smoothly into the overall Mac experience, which is very visually pleasing. It’s easy to use and doesn’t require many system resources, so it won’t slow down your Mac as the antivirus software runs.

It does a good job of identifying and removing threats — it has a 100% removal rate in tests, and with Airo’s recent update, I can feel confident that it’s actually scanning my entire Mac.

Real-time scanning, zero-day threat protection, and the browser extension are all really helpful and necessary functions of an antivirus. But the lack of a firewall app is an issue that could seriously affect security in the long run. Long scan times are also a major downside.

The software is one of the more expensive antivirus programs available and offers fewer features than comparably-priced competitors like Norton or TotalAV. That said, you can get a sizable discount when you buy multiple licenses and use this 30% off coupon.

Airo AV is good for Mac users who want a little extra antivirus protection that won’t slow down their system. But because it has fewer features than competitors, I wouldn’t trust Airo AV outside of a home setting where it’s just me or my family needing some typical antivirus protection.